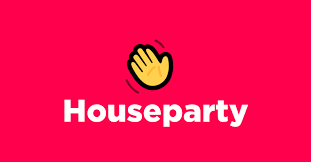 Communication can be quite a tricky thing. Especially today during the Coronavirus pandemic, communication is being forced to go even more digital than before. In the early months of the pandemic when the public was instructed to stay at home as much as possible,  talking online was the only way to communicate with the outside world. A good ‘face-to-face’ conversation meant getting to see someone’s face in real-time on a screen since it was unsafe to meet in person.

As such, video chat services are now commonplace in everyday life, replacing daily tasks like school, business meetings, or even large parties. While forms of video communication have been available since roughly a decade ago, they are now being used more frequently out of necessity rather than simple convenience. One such service, Houseparty, rode the circumstances of the pandemic and skyrocketed its user percentage since the outbreak. Released in 2016, Houseparty naturally had to compete with other video chat apps like FaceTime and Skype. However, the conditions of the pandemic have allowed Houseparty to sustain its own role in this time of virtual communication by representing the younger generations who long for going out to parties like the pre-Coronavirus days.

Even from its name, Houseparty seems friendly to the idea of fun and social activity. Its icon is a colorful hand emoji, inviting you and waving at you to come join in on the fun. Through the colorful visuals of its webpage, it promotes being together and spending time with those you care about while displaying several users spending time together talking on the app. The fun and appealing graphic design of the website feels so energetic and lively, which is the kind of behavior it promotes its users to have. The same cannot be said about other video communications apps, like Zoom. Similar to Houseparty in the fact that its popularity has rapidly increased since the pandemic, Zoom is catered to a more professional audience and thus has the matching website to convey this. Rather than being filled with buzz words surrounded by colorful and animated designs, the Zoom website is a simple blank white screen with hints of the logo’s royal blue color and filled with information on how to operate and efficiently use its service. These two apps aim to complete the same basic function but have drastically different tones and purposes when it comes to their audience and end goal.

As previously mentioned, Houseparty wants you to feel invited to something or wants you to invite people to something. They want to simulate as close to a highly social event as possible. After all, they promote themself as a “face to face social network” as opposed to the “leader of modern enterprise video communications” that Zoom promotes itself to be. In a period where real-life face to face communication is still considered dangerous, a “face to face social network” presents itself as a temporary solution to our inherent need to socialize. For the generation of young adults living during the pandemic, video calling apps can represent a seemingly lost culture of partying and mingling.

Houseparty specifically saw an increase in daily downloads from 130,000 in February 2020 to a staggering 2,000,000 by March 2020 according to an App Annie statistic that was quoted in the Financial Times. Clearly, this modern technology would not have been so readily available in any previous decade making this already unique situation the world is facing even more interesting. For instance, had this pandemic hit in the 1950s one would probably see an upsurge in telephone calls being made or more letters being sent between neighbors. It is interesting to note that our modern age of technology, not only are there apps that allow us to make a video call (which is already an inherent feature on some of our mobile devices) but also that we get to choose from a multitude of apps that follow the same function.

In my personal quest to connect with as many people as possible over the early stages of the pandemic, I found myself turning to Houseparty to fulfill my communication needs. I had initially downloaded the app a couple of years back but never interacted with it much until this year. With constant notifications informing me that people in my contacts were “in the house”, I decided to check out its features and invite my friends to some late-night calls. My friends and I spent hours either talking or using the games features in the app that allowed us to compete against each other as if we were simply playing video games in someone’s basement. Whether this was because I, as a member of “the youth,” have already fully adapted to being comfortable with communication over video or Houseparty fully accomplished the goal it set out to achieve, those late-night calls helped tremendously in staying connected during my time at home. Even my parents, who belong to the Baby Boomer generation, became acclimated to video communicating during this pandemic. They prefer the straight-forwardness of Zoom as opposed to the vibrancy of Houseparty but still became friendly with the functions of the video chat app and used it to call their friends for various get-togethers. Undoubtedly, they prefer real-life face to face communication with the outside world but for the past few months, they have adapted to the technology of my generation.

Ultimately, though, this upward trend of video communication apps might not be sustained. While they represent a way to virtually hold parties and spend time with friends, they are simply a placeholder for the real thing. These apps seemingly have an expiration date, however ambiguous that date may seem. Whenever the pandemic ends and normal methods of communication are once again safe for people, apps like Houseparty may see a decline in user usage. We will simply have to wait to see what effect these apps have had on the world during this unique period of time.