Letterboxd is, to quote its founder Mattthew Buchanan, “A global social network for grassroots film discussion and discovery”1. The app allows for users to rate and catalogue films and keep up with popular discussions in film critiquing. I, personally, got into letterboxd when I became a film and media studies major. I started using the app to compile a comprehensive watchlist of films that I deemed necessary to in developing my own perspective. I quickly became much more interested when I began connecting with my friends to see their watchlists, favorite films lists, and recent reviews. The app became a useful tool for me to track how my critical voice has changed over time and create a visual representation of my movie taste.

The app was created in 2011 by Matthew Buchanan and Karl von Randow in Auckland New Zealand under the parent company Cactus Labs. The creators originally created letterboxd as a side project which soft-launched in Brooklyn. The app was meant to fill a gap in the social media world, where Buchanan and Von Randow observed a lack of good social networking tools based on an interest in film. They wanted to replace existing strategies used by movie lovers like a notes app watchlist and create a space that consolidated watchlists, likes, and reviews in one app that allowed for users to connect their data with their friends.

The company, since its creation in 2011, has pivoted from just occupying the social media space to also be an information database and publication. Letterboxd regularly publishes journals which are featured in the app, written by in house employees and well-known professional critics. The journal tracks upcoming releases, recent debuts, retroactive opinion pieces on older films, and interviews with figures in the film industry. Along with the journal Letterboxd releases a weekly podcast with many episodes revolving around each participant bringing a favorite film to discuss with the group. The expansion into the publishing and production space was a move that solidified Letterboxd as a one-stop-shop for all things cinema.

The consumption of the letterboxd app contains three main portions cataloguing/organizing, reviewing, and feed browsing. When first opening that app there is a feed (left) of movies that are receiving large amounts of reviews that week, usually consisting of new releases and below this are a list of reviews made by friends you follow. This opening feed serves as an update on what is happening in the letterboxd community at large along with taking the pulse on what your friends are up to. Your own profile page (center and right) is populated at the top with your four favorite films to give profile visitors and followers a sense of your taste along with recently watched films and their respective reviews. At the bottom of the profile page is personal cataloguing section where users can compile a watchlist, list of liked films, and curated lists. All of these lists are open to the public and allow site visitors to browse your recommendations through curated lists e.g “films under 90 minutes”, “best scifi horror”, “movies that make you think about religion”.

These public curated lists also highlight letterboxd’s use as an organizing app. Personally, the most common reason I use letterboxd is when I am deciding on what to watch. If I cannot find something on my watchlist I will think of what I am in the mood to watch and there is surely a list that will recommend multiple films that fit what I am looking for. Along with ease of the search function, opening up a movies page will reveal pertinent information such as average star rating, well liked written reviews, and what streaming services the film is available on.

Another aspect of Letterboxd’s consumption is entertainment within the app itself. Like any other social media platform funny, unique, and well-made content is rewarded with social capital within the app. There are users who gain notoriety and followers from regularly giving insightful and well-informed reviews, coupled with well curated lists. But one extremely popular genre of review/list are comedic ones. Lists such as “Movies that make you ask ‘is Zac Efron funny? Or does he just have abs??’” or “Movies that make you think ‘I could do that’” featuring only Gone Girl are exemplary of the comedic list genre that is very popular. Reviews provide another opportunity for users to flaunt their wit, humor, and film knowledge. The popular Twitter page Letterboxd Reviews With Threatening Auras depicts how relatable and easy to understand reviews can become popular within the app and even influence discourse about a film outside the letterboxd world. 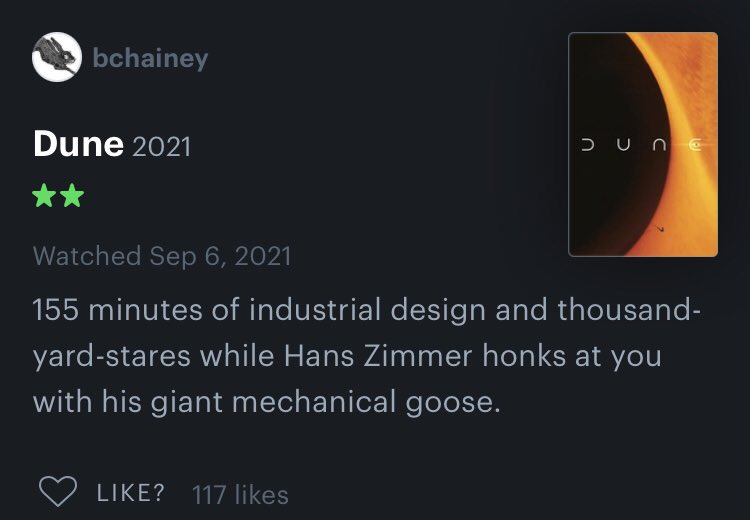 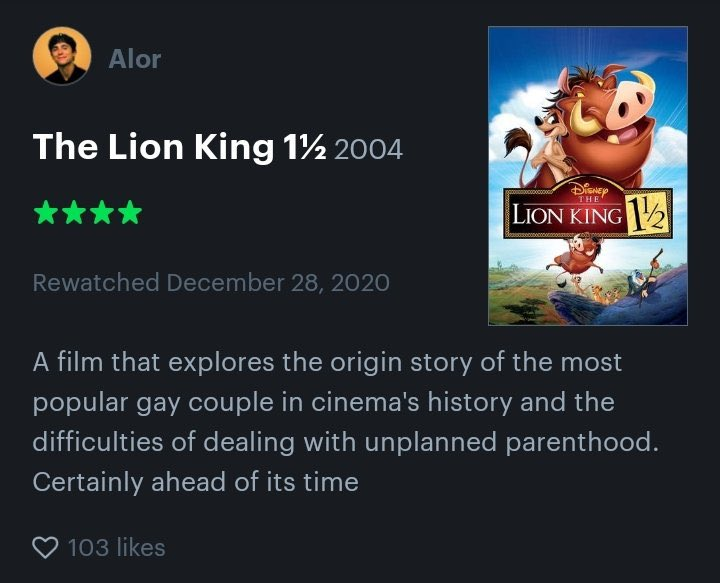 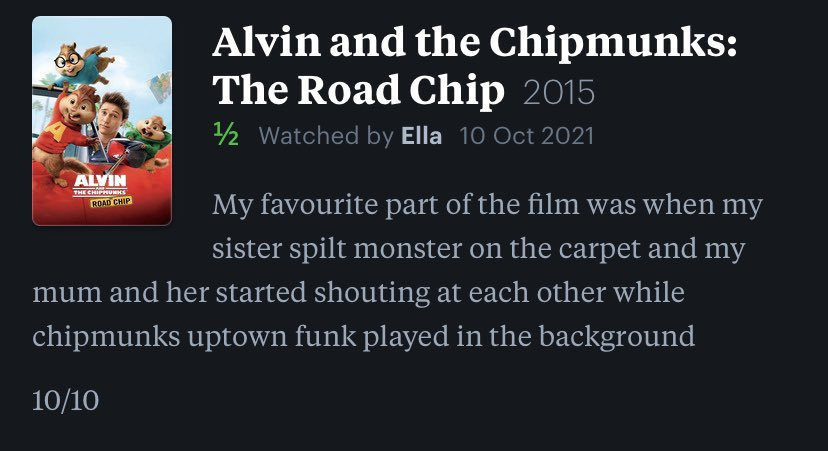 The user base on letterboxd skews younger, considering the overall demographics of movie critics and self-labeled cinephiles. The app currently has 3 million registered users and 75% of the user base is between 18-21. This demographic ultimately shapes the landscape within the app itself. The sense of humor that is popular within the app is quintessentially young millennial/older gen z. Because of the formation of a user base around a common interest, it is natural for subcultures and niche groups to coalesce.

One of the most prominent ways that identity factors into letterboxd use is the way that profiles and lists are used to form a condensed version of someone’s film taste. Anecdotally, I can recall multiple occasions where I have exchanged letterboxd profiles with a new acquaintance or friend which ultimately prompts a conversation about how many of my likes are period pieces or how it surprises me that they are such a big horror fan etc. This formation of a filmic taste and a profile that conveys that information is a major draw for letterboxd. This has created a genre of YouTube/TikTok videos based on judging people by their letterboxd four favorite films or roasting letterboxd profiles. Treating a letterboxd page as if it were a buzzfeed personality quiz is something that creates a sense of community within users and acts as a nucleation site to form connections between users.

How does the app represent itself?

The app represents itself as a kind of digital embodiment of a hard-core film lover, but still distances itself from the hyper critical overly academic cinephile. The company’s Twitter account comes off as unpretentious and comedically welcoming for people outside the professional world. This becomes evident when looking at the account’s Twitter bio, where the account lists its pronouns as “it/its”. Letterboxd’s original Twitter content includes links to new podcast episodes, member film reviews, iconic cinematography shots from films old and new, and memes that any film lover can appreciate. The twitter account regularly retweets content from other accounts, engaging both with members and nonmembers. Like many companies on Twitter, Letterboxd uses informal language which should seem familiar to the viewer. However, most corporations like Pepsi, Wendy’s, or Walmart fall flat, coming off forced and out-of-touch. Letterboxd, on the other hand, shines on this platform. Given the app’s grassroots, member-based approach, Letterboxd has social media credibility.

The Letterboxd Instagram account takes advantage of the inherent visual appeal of film, using stills to fill their Instagram feed and promote the app’s features. The Parasite shot highlights both the film’s wild, unprecedented success on the Letterboxd app, as well as user rating statistics. This post encourages the viewer to both watch Parasite and explore the Letterboxd community response. The Miller’s Crossing shot showcases how Letterboxd interacts with other movie-related apps. The Letterboxd Instagram account tagged another app: the Criterion Collection, which gathers, digitally reproduces, and publishes an extensive range of films from highly credited and regarded filmmakers. Letterboxd, in this way, represents itself as a stepping stone to a network of film apps which touches on every part of the film process.

Letterboxd runs into regulation issues common to any social-networking site. Members tend to flock to larger accounts and reviews, and largely build community through comment sections. In this way, members build a circle of friends and accounts which they interact with. This minimizes backlash the average member can receive from strangers. Nevertheless, Letterboxd is plagued by the social issues which result from the film critique industry. Informal Letterboxd users and reviews mitigate the pretension and condescension typical to critical film reviews, like one user’s one-word response to the film I’m Thinking of Ending Things— “same”(Tobias). However, Letterboxd is described by one op-ed as “a space for pretentious ‘movie buffs’ to assert their dominance” (Tadla). Columnist Tadla describes film critiquing as a cycle of judgement, in which the writer idolizes critics perceived as more knowledgeable and demeans critics perceived as less knowledgeable, creating a competitive, egotistical environment (Tadla). Another Letterboxd user shares Tadla’s sentiments, remarking on Reddit that Letterboxd has become “an echo chamber” which “encourages being pretentious and appealing to the opinion of most” (Reddit). There is little Letterboxd can do to limit this issue, as it is largely subjective. Another Reddit user points out that Letterboxd does not actually “encourage” anything. Instead, Letterboxd is what you make of it, whether that looks like comprehensive, professional reviews or clever, one-line comments. It is up to the user to shape their individual experience, by following accounts they like and blocking those they do not.

Where this user shaped model fails is in a lack consistent imposition of community guidelines. In an interview with Cinematary.com Matthew Buchanan outlines his experience in trying to regulate discourse on the app wetherr that be spoilers or a violation of community guidelines surrounding hate speech and harassment etc. This Problem came to a head in 2019 when one users review of Inglorious Bastards wishing that “the bastards would come back and take care of all the Nazis in America” (Puchko). Following this removal the company received criticism on twitter for moderating “hate” speech against Nazis while so many other forms of hate speech were left untouched. But in this regard the company demonstrated its social media savvy and delivered, what I believe to be, apt responses on Twitter.