“Why is Harlem” has many interesting autosuggestions across many different search engines. Harlem, New York is home to many communities, however it is its rich historic background that it is most known for. Filled with great Black artists of all sorts, the birth of many different pieces of Black culture originated in Harlem. As the search engines show, many people come to Google, Bing, or Yahoo to find out about this rich history, and how it came to be. The first Google search engine autosuggestion to the question ‘Why is Harlem?’ is ‘Significant to the Black community’. 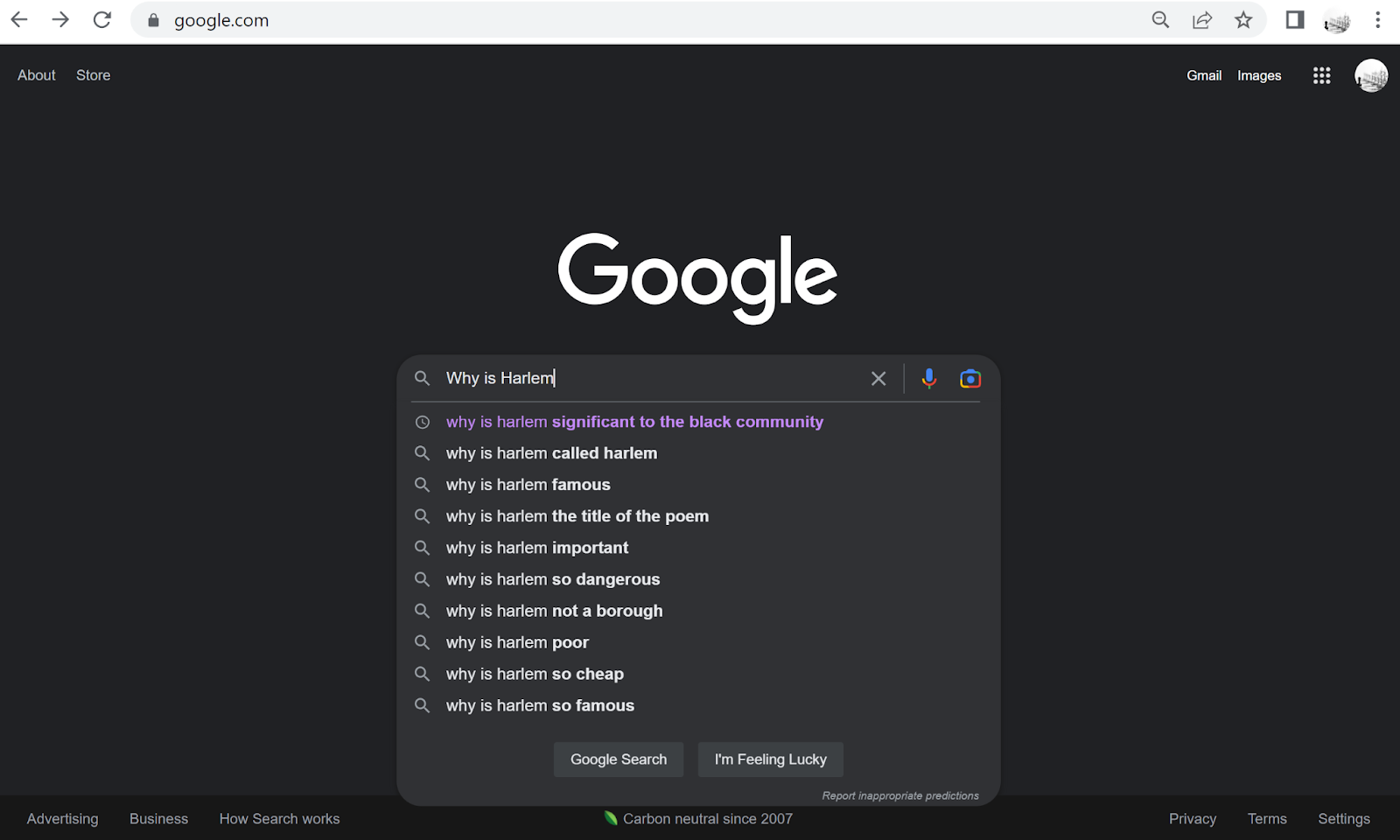 This is a search for “Why is Harlem?” on Google search engine

This autosuggestion represents the larger view of Harlem, New York. That it is predominantly Black. The reason Harlem, New York is significant to the black community is because of a time period known as the Great Migration. Black Americans populated many cities and areas and with this high concentration of black Americans in Harlem, a birth of black intellectual and artistic culture was born.  While many of the autosuggestions reflect Harlem’s famous history and connection to famous art, the Google autosuggestions also reflect Harlem’s connection to crime, and low income residents. With the high concentration of black low-income communities, Harlem has historically had high poverty and crime rates. As time has passed, the civility of the area has decreased unfortunately, although the emergence of intellectual and artistic creators has persisted.

The search engine Microsoft Bing reflected Harlem’s famous renaissance period. A time in which black culture began to take an effect on American culture. Through this revival period stories of oppression, political activism, and artistic expressions of pain all started to turn the American way of life for black Americans. As political changes were being made, success was coming to more black Americans, and change seemed to be prioritized. This is a search for “Why is Harlem?” on Microsoft Bing search engine

Bing seemingly is not as up to date with autosuggestions relative to Google, as the Harlem renaissance today is only one reflection of Harlem. Yahoo has a similar reflection to Google although there are much less suggestions. 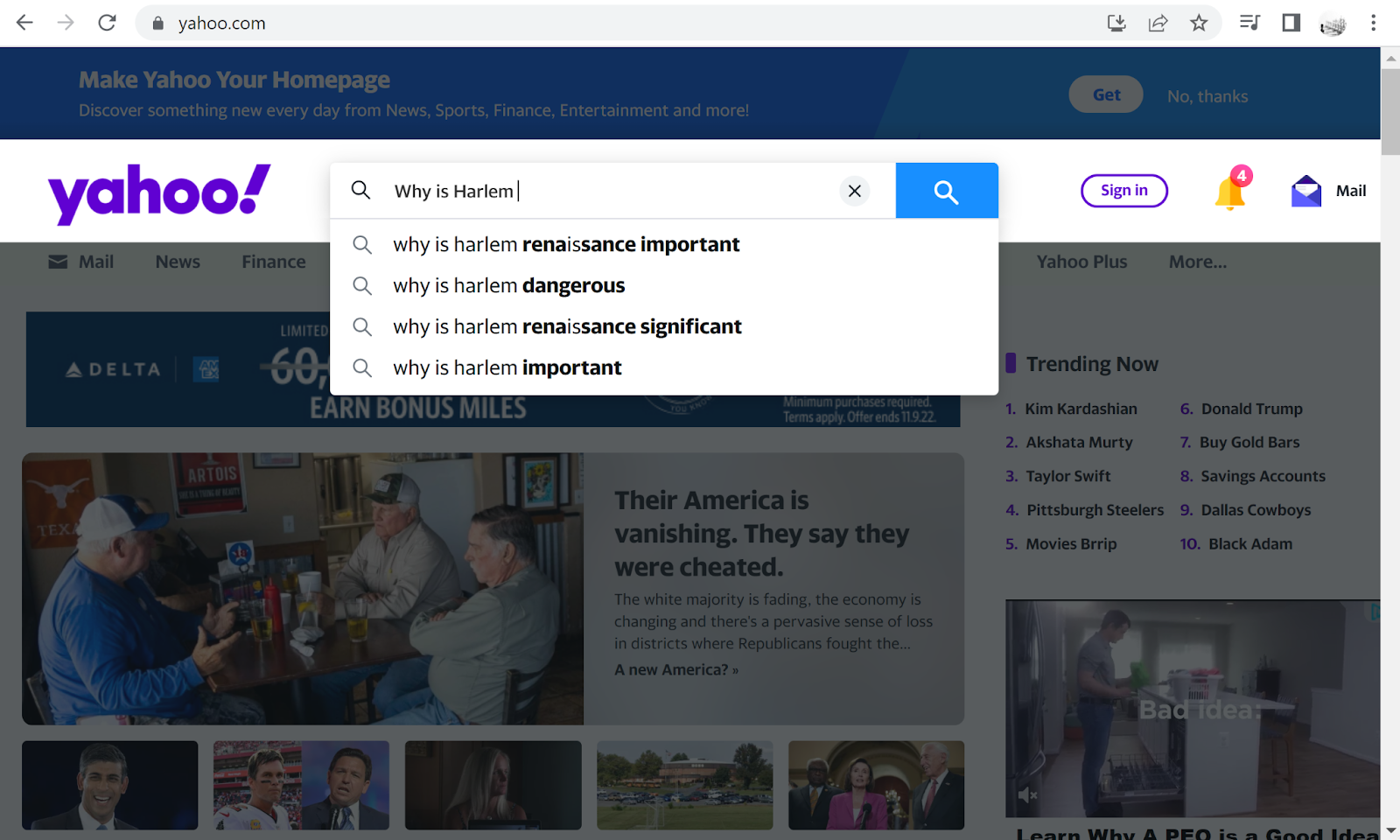 This is a search for “Why is Harlem?” on Yahoo search engine

These autosuggestions reflect two aspects of the Harlem representation that have already been mentioned.

The takeaways from this exercise are that these search engines are very powerful and capable of creating a perception for people before they actually receive fully representative information. As Noble’s talks about in Algorithms Of Oppression

“We need people designing technologies for society to have training and an education on the histories of marginalized people, at a minimum, and we need them working alongside people with rigorous training and preparation from the social sciences and humanities.”. The reason this point is so valuable is because what Noble’s is alluding to is the danger of having algorithms based on humans, because it will reflect the humans errors. However it is better to have professionals design these algorithms in order to guide the humans to an overall better more beneficial way of thinking.

Jacksonville, Florida State College at. “Importance of the Harlem Renaissance.” Literature for the Humanities, https://fscj.pressbooks.pub/literature/chapter/importance-of-the-harlem-renaissance/#:~:text=The%20Harlem%20Renaissance%20was%20important%20because%2C%20aside%20from,from%20the%20cultural%20and%20political%20life%20of%20America.